Whether studying medicine is on your mind or you have closely watched doctors attend to patients, how much they earn must have crossed your mind. Sure, doctors are more passionate about healing people and helping them stay healthy than not, however, they also have bills to pay.

Perhaps that translates to impressive bumper salaries that make them rich or at least perceived as rich by other professions and the general public. Whatever the case, doctors have a huge earning potential. 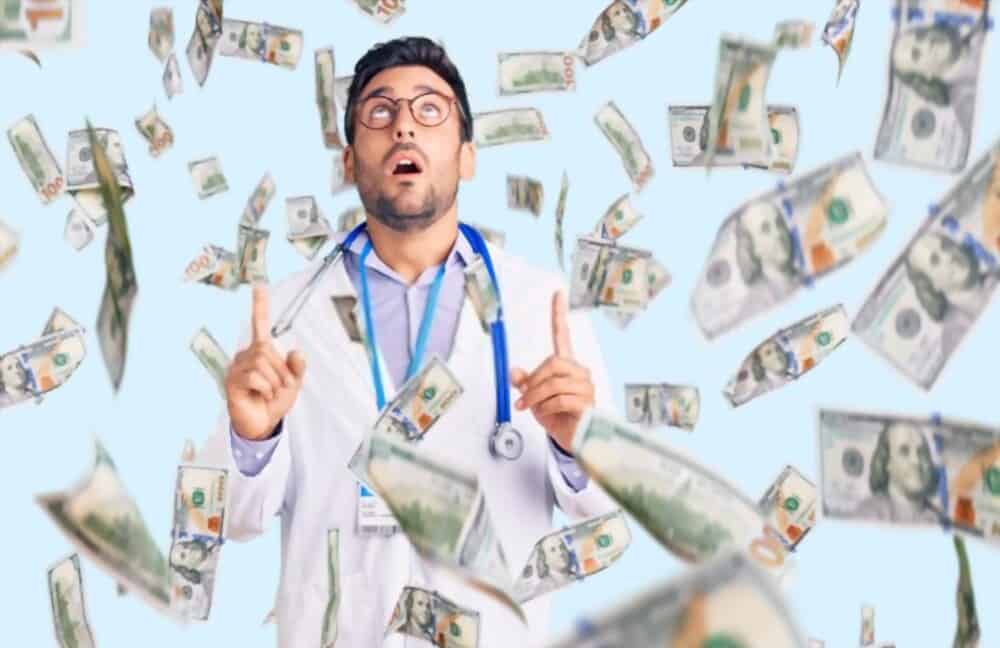 Statistics from the Bureau of Labor Statistics show that healthcare jobs topped the list of the highest-paying occupations. Further, employment in healthcare occupations is projected to grow 16% from 2020 to 2030, accounting for an additional 2.6 million jobs.

You can earn more as a doctor but whether you get rich is a question of multiple factors. A good number of those factors and other answers are examined here.

How Much Do Doctors Make?

No matter how steep in research you go, you’re not going to find universally acceptable figures for doctors and that includes all the areas of specialization. However, you’ll get closer to the right figures when you consider the area of expertise and sector (private and public).

Further, some reports include salary, bonus, and other income before taxes. But it’s essential to note that the overall earnings of doctors have continued to increase. A major reason for this is the demand and supply factor. Healthcare is something that is constantly rising and the United States doesn’t have quite enough physicians to keep up.

In addition, the prices of special medical procedures are bursting through the roof. Besides, some private practitioners earn well above six figures either with their practice or as consultants.

Why Doctors’ Salaries are High

Many reasons have been advanced for why doctors have high salaries. Some of them include:

Before outlining the top-earning doctors from different areas of specialization, note that in 2022, physicians earned an average between $243,000 – $576,000. Specialists top the list with a $368,000 average while primary physicians earned $260,000. Here are the highest-paying specialties:

Research from the American Society of Plastic Surgeons revealed that 11% of women are now more open to getting cosmetic procedures than they were before COVID-19.

Orthopedics and orthopedic surgery come in second. These specialists deal mostly with disorders in the spine and joints. Orthopedics make around $557,000 annually.

Procedures concerning the heart require careful consideration. Cardiologists may not be surgeons but it is their job to diagnose and refer patients to a cardiac surgeon. These specialists earn an average of $490,000 per year.

Urologists treat health conditions that affect the male and female urinary tract. Also, they’re trained to manage medical and surgical procedures for organs concerned with the urinary tract. Urologists can receive up to $469,000 annually.

Otolaryngologists come in next with an annual income reaching $438,000 or more. They’re called ENT doctors and handle ear, nose, and mouth diseases.

The Role of Geography

Like most professionals out there, making the big bucks often means going where you’re likely to find it. For doctors, location is a significant factor in potential earnings. Some areas are wealthier than others and at the same time, have high costs of living. For example, places like New York and Massachusetts have a combination of high pay and a high standard of living.

Many reasons can be advanced for some states paying more, however, it’s mostly due to the high population of affluent citizens and a greater number of medical school graduates.

Areas that have a low cost of living or vast populations that earn below the national average will struggle to attract talented physicians to their region. If you have just taken your oath, perhaps the best step to earn good wages is to work in rural parts of the country.

Rural areas might seem unattractive at first, but they come with high salaries, good signing bonuses, and other perks. In case you’re wondering, Kentucky, Tennessee, Alabama, Missouri, Oregon, and Indiana feature among the highest-paying states for physicians. You can earn over $300,000 per year in these states.

It’s a fact that doctors make good money, but getting rich is impeded by many factors, including:

Many students in the United States take loans to complete their education. Doctors are no different.

Moreover, with more than ten years in school and clinical settings on the way to becoming professionals, they owe more than regular students. As a result, many doctors struggle to pay back the loans even if they earn up to six digits annually.

It’s not uncommon to see some medical students practicing ten years later than other jobs. This delays them from having clear investment plans from the beginning.

That’s why they’re encouraged to start thinking about retirement investment plans as soon as possible. In addition, some doctors don’t just take savings or investments seriously, while others may receive bad financial advice.

READ→
Are Pharmacists Doctors? What You Need To Know

Too Many Hours Of Working

Working hours are often so many and stressful for doctors. For example, some of them spend more than sixty hours per week inside the hospital.

While their role as life savers matter, their overt concentration on their practice can affect their financial state much later. They will have a hard time making good investment plans or avoiding liabilities working too many hours.

From research, there are about 3000 medical negligence lawsuits every year. While some cases are reasonable, others are often unexpected and frivolous with the aim of getting money out of the doctors

Lawsuits aren’t cheap and with many doctors trying to clear their student debts and other bills, facing legal actions can put a dent in their pockets.

Will Studying Medicine Make You Rich?

Many students enter different career lines because of the promise of getting rich or greater financial security. Medicine is no different, but will studying this course make you rich? It won’t. Doctors get paid good money and have other perks to lead a comfortable life, but that’s far from rich.

There are many sacrifices you’ll have to make, especially if you’re not from a family that can comfortably cover your tuition. That might mean more than $100,000 in student loan debts. That aside, prepare for many years of intense training, studying, and clinical work. You’ll face enormous pressure to excel at courses and to keep up with your peers.

Pursuing medicine strictly for money is not going to make you a successful physician or a rich one. You need passion to stay the course and a deep desire to help people improve their health conditions. When you love what you do, it’s easier to manage the journey and see it through. Overall, it’s best to do what you love and do all you can to positively impact those around you.

READ→
The Reasons Behind Students Dropping Out of College

So are doctors rich? Now that you know how much doctors make and the factors that affect their earnings, the question is easy to answer. Being rich has a lot more to do with your net worth than what you earn (your income). You can make more than $500,000 annually and still have a problem pulling a million together for some investment.

Generally, doctors aren’t rich, but a few of them are. They’re well-paid and have some of the highest-paying specialties in the United States, with an average annual salary far above the national average. However, to be considered rich, doctors would need a high net worth and assets that can sustain their lifestyles. That’s not often the case, though.

Doctors deal with issues like debts from their schooling years, late starts, and potential lawsuits. Besides, Geography has a significant role to play in how much they earn.

If you’re thinking about entering the medical profession solely for money, think again. Sure, you can manage a high paycheck but getting rich is a whole new level.