A good doctor-patient relationship stands at the center of the medical profession. However, much of that is threatened by the latest trends. One such trend is wearing tattoos by doctors and other health professionals.

Would having one shake the patient’s trust in the doctor’s ability to care for them? Does having a tattoo take anything away from their professionalism? 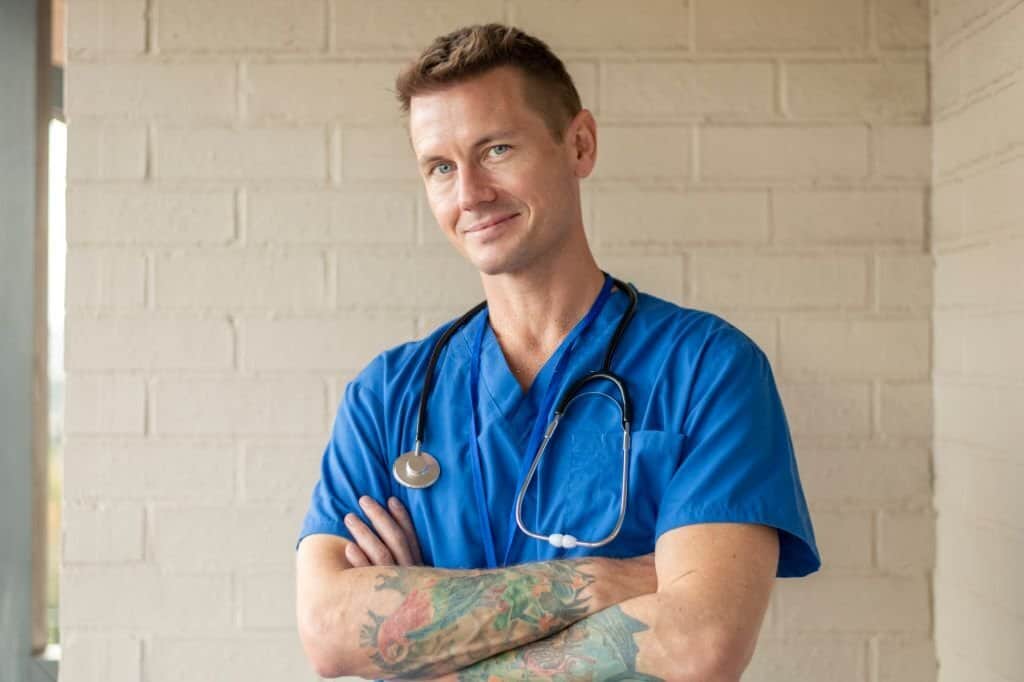 These are some of the questions medical experts and many of their patients have to answer. But with the growing number of inked individuals in the United States spilling into the profession, you’re bound to find several doctors sporting one.

In addition, the standard image of a doctor is clean and noticeable from a mile off. Managing boards, patients, and their families have different opinions about doctors having tattoos.

In the following paragraphs, you will learn whether doctors can have one, possible rules, misconceptions, and more.

Can Doctors Have Tattoos?

The answer to this question is yes/no because it depends on many factors. Some of them include your workplace, the patients you come across, and the general makeup of the facility.

According to research, doctors who appear in the ‘traditional sense’ expected of them are much preferred over their tattooed counterparts. So expect initial resistance from the authorities about that thing crawling on your skin.

Further, most patients attended to by physicians prefer a traditional look, including a well-knotted tie or scrub with lab coats. The issue of tattoos is mainly laid to rest after patients and authorities witness the competency of the tattooed doctor.

As a doctor, you’re more likely to get away with your ink when you can back it up. Still, doctors can have tattoos in line with the laws of their resident state or when their medical facility permits. Whatever the case, expect some rules or guidelines on how you should appear as a doctor.

Specialties matter because several physicians can have tattoos without even those in charge knowing. For example, Diagnostic Radiologists may have tattoos in obvious places because they rarely have contact with a patient. They often stay in offices checking out films and scans before interpreting them.

On the other hand, pediatricians work with children more than half the time, so they may be questions about them sporting visible tattoos.

The Rules and Policies

Rules are made to govern different areas of life, and doctors having tattoos is not an exception. Some rules come as policies, depending on the facility these professionals find themselves in. To that extent, hospitals generally ask doctors to cover any tattoos while they are at work. Some reasons include hygiene purposes and not to irk patients or their families.

In some cases, tattoos above the neckline or beyond the wrist are frowned upon and not permitted. Some patients and their families might have issues with a surgeon covered in ink and attending to them. However, doctors are humans and should find expression for their art within the rules.

Whether in a hospital or medical facility, you might have to work according to some rules and regulations. Thankfully, most hospitals and medical facilities do not have harsh policies regarding tattoos or where they are placed. However, the rules vary from place to place, and you may be required to cover up during work hours.

The Civil Rights Act is clear on the issue of discrimination. However, a physical appearance, including tattoos, is not protected from discrimination under the Act. That means doctors can be exposed to hiring, firing, and promotion biases based on an employer’s preferences. Some senior medical professionals also stigmatized juniors with tattoos, viewing them as bad models for the profession.

Unless you’re good at what you do and have some moderate inks at inconspicuous parts of your body, don’t expect any favors. If prospective employers aren’t fans of tats, they will state it in their policies. If that’s the case, it won’t matter whether you graduated top of your class.

Further, research shows that women bear the brunt of the stigma compared to their male counterparts. That said, the discrimination against doctors with tattoos is slowly chipping away.

What Kind of Tattoos are Permitted?

There are restrictions in the AMA Code of Medical Ethics document doctors have to live with. Some of them revolve around having tattoos described as offensive in nature or located in certain spots that interfere with procedures, such as the hands.

Note that such restrictions are strictly in place to maintain professionalism and ensure the safety of patients.

Medical Concerns: Doctors are not immune from health problems while they’re medical professionals. Getting a tattoo is often risky and can cause infection, which isn’t a good thing for physicians. Even though the chances of that happening are low, ensure you’re free of allergic reactions to the inks and other materials for tattoos. You might have to take time off work to heal if you’re allergic.

Further, it takes roughly two to three weeks for a tattoo to heal properly. The area will scab and peel away, and who says you have all the time for that to happen?

The perfect time to get a tattoo is a long vacation if you are afforded one. The art and spots would have become a part of your body without the hurt.

Patient Concerns: Medical facilities like hospitals and specialist centers are built chiefly for patients. Some of them have an uncompromising stance on negative tattoos, especially with doctors having them. Sure, times are changing, but elderly patients and some families need convincing. Besides, your location, establishment, and the type of tattoo are other factors to consider.

As for younger patients, they often have no qualms about seeing doctors with tattoos. They might want one for themselves, too. Children are particularly more tolerant and intrigued with what they see. So they will be glad to learn why a doctor is wearing a tattoo.

Will Having Tattoos Negatively Impact Your Career Progression?

Generally, tattoos can limit your job options, and that’s especially true for doctors and other health professionals. For those just starting as doctors, the effects may not be immediate, but concerns will begin to arise for those climbing the professional ladder to higher levels. However, your experience level and job specification often determine how you’re seen by other staff, management, and patients.

Doctors and other healthcare administration and management professionals are less likely to get a viable tattoo. They’re also less likely to cover their existing ones. However, many hospital workers claim that a visible tattoo can hurt your chances of steady professional growth.

Moreover, many hospitals have established a policy on visible tattoos and piercings, so you’d best avoid acts that limit your professional growth.

Doctors are primarily concerned that patients may not understand their tattoos and the reasons behind them. They may even go as far as labeling them “criminal elements” in society, firmly believing tattoos are unprofessional.

Your Career Should Come First

Even though close to 40% of Americans have one ink variation or the other, many people still have reservations about tattoos. More of those people hold such reservations against doctors who are seen as model professionals in society.

Stemming from that, it’s important to consider your career and what you hope to achieve before getting a tattoo. Also, it’s logical to observe the official policies around the workplace you intend to practice so that you’re familiar with the do’s and don’t’s.

If tattoos are allowed where you work, choose the one you want. That includes the size and art the tattoo carries. A tattoo of a gun, a gang sign, and other unwholesome art will increase the suspicions to a whole new level and may ultimately cost you your job.

You can imagine the look on the faces of veteran doctors when they see the current crop of practitioners stamped with tattoos. Many thoughts, such as unprofessional, miscreant, and criminal, will run through their minds.

Regardless of their thoughts about doctors having tattoos, there are very little old veterans can do about the growing trend. Since some are employees or rank high in some medical facilities, they can only create policies that control how doctors apply tattoos.

If tattoos are acceptable in your workplace, consider using miniature ones or your attire to limit their visibility. More often than not, perception matters, especially when patients and their families are involved. So it’s best to avoid irking your employers and patients or affecting your chances of climbing in the profession. That said, doctors are mostly allowed to have tattoos.

Now that you know doctors can have tattoos, note that they’re still subject to policies created by their employers. For this reason, doctors must ensure they don’t fall foul of the rules or apply tattoos that create issues while performing their duties.