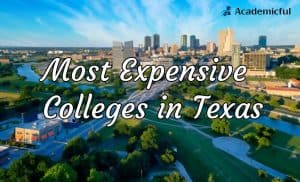 Do you want to know what the most Expensive Colleges in Texas are? Are they worth the money?

Schooling in Texas could be expensive and sometimes cheap. It all depends on what area or county of the state you are in.

Most people attend colleges with higher tuition fees because education is placed in high priority. In a region with a very large mass and population of Americans, it is expected to see a lot of students in college.

If you are reading this, then you have come to know about that too. In this article, I will reveal to you the 9 most expensive colleges in Texas, and the average tuition students are required to pay.

So let’s dive right in and see.

Most expensive colleges in Texas

Please note that the list will be in descending order, in relation to the tuition fees. Therefore, the most expensive will come first.

Located in Dallas County, Texas, Southern Methodist University is one of the oldest colleges in the area. It is a private, however non-profit institution, where students spend a duration of a minimum of 4 years to acquire a degree.

The highest level of offering in the university is Doctor’s degree-research/scholarship and professional practice.

Southern Methodist University is classified as a Research University. The average tuition for the 2022 session of the college is $60,236.

Most times, undergraduates receive grants and scholarships to study at the University. Statistics show that over 71% of admitted students have received aid worth up to $34,875.

Rice University is situated in Houston Texas and happens to be the second most expensive college in the state. It is also a Private and Not-for-profit institution with a student-faculty ratio of 6:1. The average amount paid by students at Rice University is $52,900.

Rice is a research University so it makes use of its position to pursue path-breaking research with the aim of creating opportunities to collaborate for the benefit of making. Ranked among the top 20 universities in the United States by the U.S. News & World Report, you should expect nothing less than a great impact on society.

The third on our list, with an average tuition of $51,700, Texas Christian University is another private and Not-for-profit institution located in Fort Worth, Texas.

According to stats, over 73% of undergraduates enrolled at Texas Christian University have received grants or scholarships with an average aid value of $27,036. The student-to-faculty ratio at TCU is 13 to 1.

Baylor happens to be the oldest University in Texas, after its establishment in 1845. It is a privately-owned (Not-for-profit) institution with an average tuition of $50,232.

It is one of the few Texas colleges with high rates of grants and scholarships. At least 90% of students enrolled in Baylor have received theirs (Around $24,605).

Baylor is a private Christian University and is also ranked as a Research institution. The University provides a vibrant campus community for more than 20,000 students by blending interdisciplinary research with an international reputation for educational excellence and a faculty commitment to teaching and scholarship.

With average tuition and fees amounting to $47,392 for the year 2022, Trinity University stands strong as the 6th most expensive college in Texas. It is located in San Antonio, Texas. 97% of the enrolled undergraduate students have received grants or scholarships and the average aid amount is $28,976.

This figure is attained 10 years after. The salary range after graduation from Trinity University varies by field of study and the average salary range is $39,100 to $60,200.

Southwestern University is located in Georgetown, Texas, and is classified as a baccalaureate college. Its highest level of offering is also a Bachelor’s degree.

The Private (not-for-profit) institution’s students are required to pay an average of $47,000 per session. It is the most expensive Baccalaureate college in Texas.

The college has a total enrolment of 1,506 students, with a student-to-faculty ratio of 14 to 1. Out of these undergraduate enrolments, 97% have received grants or scholarships with an average aid amount of $26,480. The average earning after 10 years of graduation is $63,400.

The average tuition & fees of the University of Dallas is $46,900. All students enrolled in the college will be required to pay around this amount.

It has a total undergraduate enrollment record of 2,489 and 97% of this figure have received grants or scholarships and the average aid amount is $29,021.

Austin College is also a Private (Not-for-profit) institution and is located in Sherman, Texas. The university is classified as Baccalaureate college – Arts & Sciences by Carnegie Classification.

Its highest level of offering is also a Master’s degree, which means it is more than a 4-year University.

The average tuition & fees of Austin College for 2022 is $43,530, bringing it to 9th on the list of the Most Expensive Colleges in Texas. The university has a total undergraduate enrollment of 1,302.

However, 100% of the enrolled undergraduate students have received grants or scholarships. The average aid amount of these benefits is $32,227.

With a student-to-faculty ratio of 12 to 1, you can expect Improved learning in the college. The average earning after 10 years of graduation is $52,800. The salary range after graduation from Austin College varies by field of study and the average salary range is $23,800 to $33,600.

From the list, it is apparent that Southern Methodist University is the most expensive college in Texas. The Dallas-based University has its tuition and fees pegged at around $60,236. In the same order, it is followed by

The least tuition & fees is that of Austin College which is around $43,530. You must have noticed that all 9 colleges mentioned in this list are Private institutions.

This is why they are very expensive. However, even though they are privately owned, they remain non-profit oriented.

If you have been looking for the Most Expensive Colleges in Texas, then you have it all on this list. Please note that these are their fees at the time of publishing this article. In the near future, the data may change, but we will try to update the article for you.