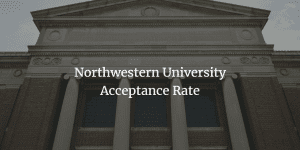 So, do you want to know more about the Northwestern University acceptance rate for all students? You’ve come to the right place.

Without further ado, let’s dive into it.

The Northwestern University acceptance rate for the class of 2026 is 7%. Out of 51,554 applicants, only 3608 were offered admission.

When compared to last year’s admission stats, the number of applications increased by 7.6%, and admit rate increased by 0.2%.

Early decision applicants have a better chance of gaining admission into Northwestern University because most of them are top students who believe they are perfect fits for the institution and fewer people apply as ED.

ED students have a high level of commitment and interest which the university loves. It may interest you to know that about half of Northwestern admitted students were admitted through early decision.

This doesn’t mean you should apply through early decision. Unless you know what you are doing, it feels like a crapshoot.

What GPA do you need to get into Northwestern?

To get into Northwestern University, you need a minimum GPA of 3.28 on a 4.0 scale. Competitive applicants have GPAs of 3.7 and above (unweighted).

A ‘B’ should be the minimum grade on your school transcript(s). The more A’s you have, the better.

While SAT or ACT scores is optional for the 2022-23 academic session, you shouldn’t ignore them. Most NU admitted students have an average SAT score of 1500 and ACT score of 34.

If English is not your first or primary language, you need to show the institution how proficient you are in the English language by taking exams like IELTS, DET, or TOEFL. There are no minimum scores for these exams but you should try to get a high score.

Even though those who submit test scores tend to have high scores and GPAs, you can complement your below-average GPA by having high test scores.

There’s more to getting into Northwestern than GPA and test scores. For example, Kellogg school of management requires GRE (minimum: 163) or GMAT (minimum: 727) for admission.

How difficult is it to get into Northwestern University?

It is difficult to get into Northwestern University. They have a lot of admission requirements that most applicants don’t meet which makes its acceptance rate so low.

Also, the admission criteria for each school are quite different. For example, McCormick majorly admits top students with great academic standing.

The admission committee is responsible for reviewing applications and selecting those eligible for admission. What they check for are academic growth, personal characteristics, intellectual curiosity, involvement, and impact on the community.

Here are the most important things that determine your chances of getting into Northwestern University.

All in all, it’s all about standing out from the competition. Here’s a quick fact; more than 90% of admitted students are in the top 10% of their class.

Whether you apply for financial aid or not has nothing to do with your admission. Even though getting financial aid at Northwestern University as an international student is hard, you can be lucky.

Transferring between schools at Northwestern University is easy, all you need to do is meet with an advisor to know about the requirements. The only exception to this is the Northwestern Bienen School of Music where you need to audition and be accepted as a freshman.

You should know that even the most qualified applicants get rejected. If you are on the waitlist you may have a slight chance of getting in, the Northwestern waitlist admits rate is 1.3%.

Hopefully, you were able to learn about the Northwestern University acceptance rate and its GPA requirements in this article. If you have any questions, leave a comment below, and don’t forget to share this post with your friends.