You’re up late trying to figure out how to write an essay due by morning and see thick smoke and a ball of fire in your neighbor’s home. You pick out your phone and dial the emergency number immediately.

It takes a few minutes before everything is under control from the response team. Now, you’ve got the idea for your essay, and at the same time, you’re wondering what to call the team that so quickly arrived. 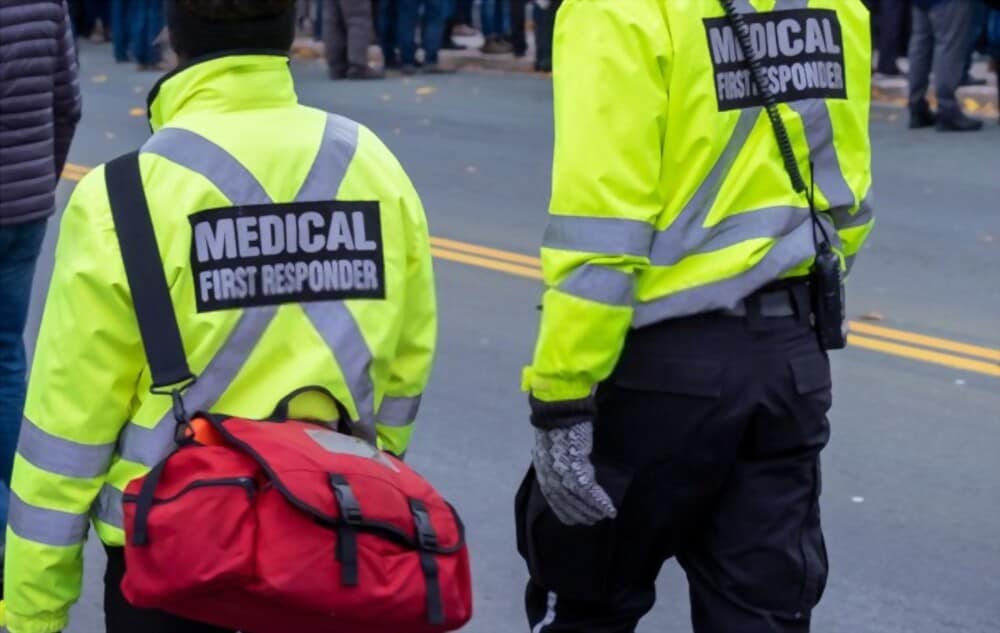 Among other functions, first responders arrive to provide instant medical care to the injured or direct traffic around any accident before anyone else. When you call 911, they arrive at your home or at the scene of the incident to provide emergency treatment and transport those affected to the hospital if necessary. Like others before you, you may be wondering “who exactly are these people?”

The general answer often provided is that they’re a special team of mixed experts that include nurses, but are nurses first responders? Let’s find out!

What is a First Responder?

A first responder is an individual who has received specialized training to help him/her provide adequate first aid in emergencies. They are called first responders because they are the first individuals or teams to respond to an emergency and arrive at the location of the incident.

READ→
Do Nurses Get Pensions? All You Need To Know!

Good examples are EMTs (Emergency Medical Technicians) and paramedics that arrive at the scene of accidents and other health-threatening situations. Also, they provide on-site medical support, care, and attention before taking patients or casualties to hospitals or healthcare facilities for further medical assistance.

First responders trained under different specializations often work together to manage a crisis or emergency response. For example, the police, EMTs/paramedics, and firefighters often arrive simultaneously when a building or house is on fire.

While police officers isolate the scene, firefighters work to quench the flame, and the EMTs/paramedics attend to the injured/wounded. The bottom line is those first responders have the specialized skills to deal with the threats posed by various health and safety situations.

Who Classifies as a First Responder?

There are some individuals or groups that classify as first responders. The most popular ones include EMTs, paramedics, police officers, and firefighters. Other types of first responders belong to specialized units trained to manage various levels of threats and situations.

Since first responders are usually the first people on the scene during emergencies, they are often required to travel to the location of the incident. On getting there, they provide emergency care and move patients to a hospital or healthcare facility for additional medical care.

Apart from the types of first responders mentioned above, others include:

Subgroups of first responders are necessary for some situations. These individuals include highway workers, state troopers, park police/rangers, sheriffs, armed security guards, and other professionals.

READ→
How To Become a Licensed Real Estate Agent in Canada

Subgroups come in handy when the existing first responders aren’t yet present or have insufficient numbers.

Do ER or Trauma Nurses Qualify as First Responders?

It’s easy to spot nurses in an Emergency Room (ER) and assume they are first responders. Whether they’re attending to trauma or other emergencies, they can’t be considered first responders.

They provide care in the hospital setting instead of arriving first at an emergency outside the hospital. As such, they’re not classified as first responders.

Triage nurses also assess the medical needs of persons that arrive every day for treatment. They essentially sort patients into a priority hierarchy regarding their health status with those needing immediate care ranked first. However, they do not treat the patients or see them within the hospital setting, which means they’re not first responders.

The Question of Flight Nurses

Unlike regular registered nurses and other forms of nursing, flight nurses utilize helicopters and other aircraft to arrive at the scene of an emergency. They do not work at hospitals or healthcare facilities but operate from a helicopter that provides on-the-spot medical aid to patients in need.

That makes them first responders. Moreover, they transport patients to healthcare facilities after on-site treatment for advanced medical care.

Flight nurses also provide first-time care during large-scale emergencies like natural disasters, especially when vehicles can’t get to such locations. They pack supplies, medical tools, and different gear. For example, they can reach incidents in mountainous terrain or flooded places faster than on-ground first responders.

When can Registered Nurses be Called First Responders?

Such an incident is clearly defined as “a situation in which the need for medical care and resources, including personnel, exceeds that which is available.” An example of MCI is the 2001 attack on the twin towers in New York City caused by terrorists flying planes into the buildings.

Mass shootings are also MCI situations registered nurses can act upon as first responders. Sometime after the COVID-19 Pandemic hit, several bodies referred to the situation as an MCI of the highest level.

Also, governments were primarily unprepared to face it, which led to an overwhelmed healthcare system worldwide. While many experts call registered nurses, front-line healthcare workers, during the pandemic, everything points to them as first responders.

Whatever the case, MCI situations need immediate medical attention, and registered nurses can provide that.

Now that you know this much about first responders, are nurses classified as one? The answer is no. However, there are a couple of exceptions since nurses play vital roles in providing care and general medical assistance.

What distinguishes them from regular first responders like firefighters is that they are not the first ones on the scene during an emergency.

In Mass Casualty Incidents like natural disasters and pandemics, registered nurses are first responders. Further flight nurses are considered first responders since they use helicopters to pack their medical gear to reach difficult locations first.

Overall, nurses are a vital part of the healthcare system, but they’re not first responders. That classification is reserved for EMTs, paramedics, police officers, firefighters, flight nurses, etc.