Like other careers and professions, any interested person would want a clear idea about how much they stand to make. It’s no different in the welding field. One thing is clear, though, the question of whether welders make good money is one without straight answers. That’s because welding is a wide industry covering multiple specialized areas.

There are pipe welders, fabricators, shipbuilders, tig welders, arc welders, and several more. Depending on where you intend to work, your experience, and the organization involved, your salary can vary. 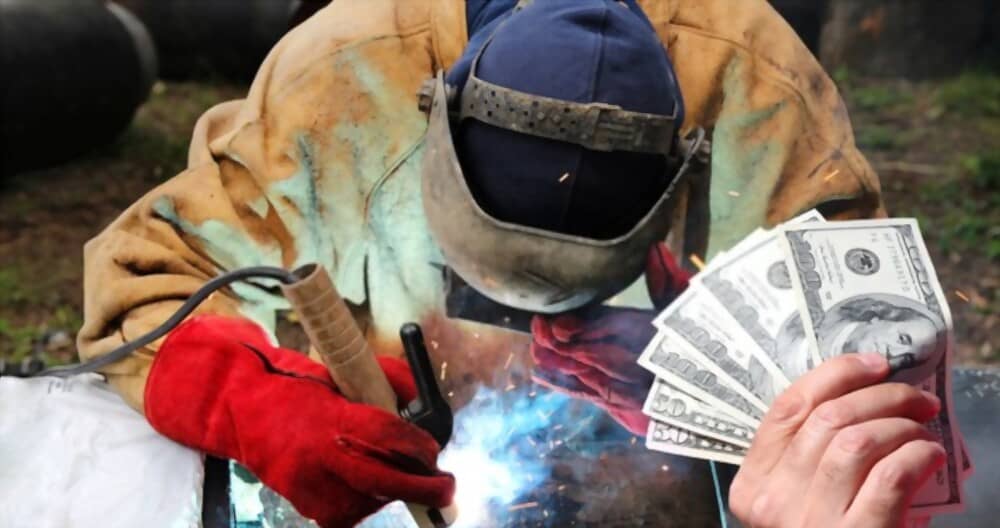 Also, recent statistics show that salaries of welders can start from about $35,000 and reach close to the $300,000 mark. In between those figures, you get an average that goes above the United State’s national average.

The factors leading to good pay and other parameters are examined here, so you can understand what helps you earn top dollar with welding as a career.

So, do Welders Make Good Money?

Straight off the bat, yes. Currently, more than 3 million welding professionals are working in the United States. As a craft and trade, it takes some amount of skill and production techniques. That includes heating metals to high temperatures before joining them to an oxygen-based arc that results in a molten pool.

Due to their work, welders are some of the most sought-after workers in the job market. Even though it’s not the highest-paying career, there’s enough room for workers to grow and earn more.

That takes a skilled hand and a good measure of experience. But on average, welders make a salary of around $52,000 per year. In contrast, other jobs, including some nursing professionals, earn an average of $38,000 per year.

Regardless of inflation and other money-pinching factors, welders keep making good money. As a result, current salary levels are expected to rise further with more demand for experienced hands.

How Much Do Welders Make?

The answers to this question will vary from source to source. That’s because the figures keep changing, however, the Bureau of Labor Statistics says the average welder’s salary is about $42,00 per year.

Further, in one survey by the Fabricators and Manufacturers Association, most entry-level welders’ salaries started from $17 per hour. Again, experience is key and will lead to higher wages.

Welding in an area where the demand is high also helps. For example, when shipbuilding is hot, the Gulf Coast carries vast promises of more pay for welders.

Factors that Determine a Welder’s Salary

Location matters so much to realtors and the same applies to welding. For example, in the United States, welders have to know where their skills are in-demand and which states pay the most.

Alaska often heads this part, thanks to its many welding schools and prominence along the coastline. Apart from the thriving shipping and maritime industry, the Alaskan economy is stable, and that suits welders.

Welders in Alaska earn close to an average of $68,000 while those in North Dakota can expect an average of around $55,000. Hawaii is another welding hotspot where you can earn an average annual income reaching $62,000.

Whether in welding or other careers, experience always plays an integral role. For starters, you might struggle to hit the $50,000 mark at the beginning. But as you grow into the job and acquire more expertise and years under your belt, you can hit a big payday.

As a welder, you can opt for formal education. This way, you’re ahead of those without one and you can easily meet the criteria some employers set for those with four-year college degrees. Also, you can earn certifications through welding schools and community colleges. With extra certifications or licenses, you’ll earn more than welders without accreditation.

READ→  Can Teachers Have Tattoos? (Pros and Cons)

The Type of Work and Employer

In most cases, welders work based on contracts and short-term assignments. Projects can last from a couple of weeks to months and several years. Depending on the contract and employer, welders can make good money. For example, the military and some big corporations hand out lucrative contracts.

Rig welders aren’t just the highest-paid welders in the United States, but in the world. They have the most advanced education and certifications, and they often work long, difficult hours.

Most times, they have to perform underwater welding and hyperbaric welding. It’s a risky job with vast benefits with an annual salary ranging from $52,000 to $207,000.

Underwater welding is another dangerous job with a higher rate of workplace fatality than most. Shipwrecks, subsea structures, and oil-related structures are some of the most difficult tasks they have to work on.

Besides, underwater welding requires wet welding D3.6M certification from the American Welding Society. They can earn between $38,000 and $147,000 annually.

If you’re going to be a nuclear welder, you’ll need several certifications, including underwater certification and commercial diving certification. However, the highest requirement you must meet is a security clearance from the Federal Bureau of Investigation (FBI).

That’s because the job is centered on nuclear materials or nuclear-powered vessels and reactors. Expect an annual salary ranging from $22,000 to $145,000

War zones, military installations, and structures make up some of the places you’ll work in as a military support welder. You’ll be risking your health and life after going through stressful training. But an annual salary between $37,000 and $160,000 suggests it’s worth it.

Tips for a Successful Welding Career

Professional welders making good money had to pass through different stages. Some tips you can learn from them include:

This article has answered the question of the earning capacity of welders. So, yes, they make good money, which could go well over $200,000 depending on the location and risks involved. Education, experience, and skill levels are factors you must consider. With those, it’s easy to command higher pay in the industry.

Further, some specialized services in the welding industry generate more income for welders than others. Rig welders and nuclear welders are good examples of such workers earning far above the national average.

Now that you know this, you can consider your prospects in the welding industry. Get trained, certified, and practice a lot, so that you can make the big bucks!