There are over 145,100 chefs currently employed in the United States, with the average age of an employed chef being 40 years old. What stands out from these numbers?

Almost every single one of them is instantly recognizable, thanks to their chosen color – white. Chefs, wherever you sight them, prefer to put on white, and that has always intrigued people. 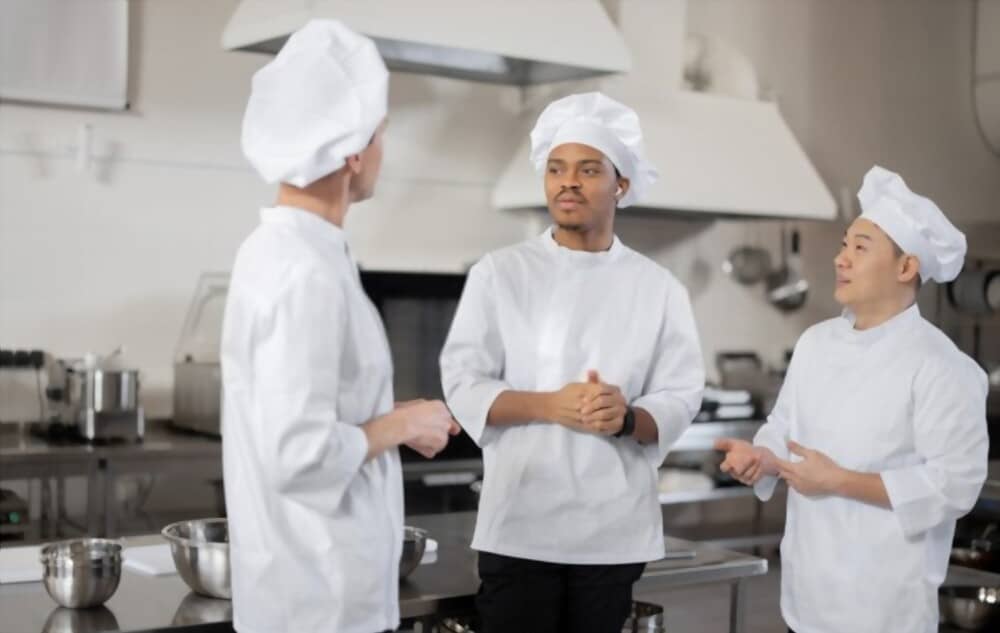 Every chef can recall when he/she first put on the whites while others take things further with a white apron to match. However, the history of chef’s wearing white dates back to the 18th century when a certain Marie-Antoine Careme desired to instill a sense of professionalism and respect in the industry

Since then, it has become commonplace to find chefs of all levels sporting the white color. Whether you’re keen on this or looking to join the industry, you’d want reasons why white is the choice.

Why do Chefs Wear White?

Many chefs have a passionate commitment to cleanliness and often go the extra mile to keep up pristine appearances. Wearing white adds credence to this stance and there’s no better way to let customers know you have a clean kitchen.

Also, people will have more confidence in eating their orders when they present themselves in spotless white apparel. What’s more, looking neat and presentable is just as important as the tasty pasties, cuisines, or dishes you want to be eaten.

Chefs don’t just have to look presentable, but there’s also a lot of responsibility to live up to. Part of that is wearing a white jacket and apron that’s not stained. Because it’s white, the tendency of getting little stains on it is high. Also, food spills on jackets can create issues with cross-contamination.

Seeing no stains on a uniform is even more impressive and chefs do a lot to avoid getting them stained. Besides, wearing white shows they have absolutely nothing to hide, regardless of who’s in front of them.

Maintain a Professional Touch and Look

You can be the best chef around with meals to please the taste buds, and still have foodies puzzled at your appearance. Chefs wear white to avoid that with a professional look and touch.

Even when spills happen, the jackets are made in such a way that they can be turned in. That aside, chefs often have a couple of them to change, so they can maintain a tidy appearance.

Chefs have to contend with excessive heat in the kitchen. Any other color of uniform will probably absorb heat. Since they’re in there for extended periods, wearing white is essential to their comfort. That’s because white naturally reflects heat instead of trapping it.

Chefs can stay cool for long hours in the kitchen, especially when their uniform is white and breathable.

READ→  How To Become A Real Estate Agent in The Metaverse

Components of a Chef’s White Uniform

Wearing white is a tradition that will live for ages to come because there’s no better alternative, at least, for now. If you want to become a chef, you’ll have to get the dressing right and the components of the white uniform.

Firstly, a traditional chef’s uniform comes with a tall, pleated, white hat known as a torque Blanche. Secondly, the jacket is double-breasted and made from a thick, white, cotton cloth.

The torque Blanche was not only common with chefs. Athletes, magistrates, and even academics wore it. However, when Marie-Antoine Careme introduced the chef’s jacket, hat, and apron combination, they became the standard across the hospitality industry in the mid-19th Century.

The chef’s white uniform is an indication of the best among chefs and does a lot for their appearance. Wearing white prevents cross-contamination in food, protects chefs from the elements of the kitchen, and helps them stay accountable. In short, the uniform is a representation of a restaurant’s professionalism.

Keeping the white uniform in clean and mint condition is hard work, especially with food, spills, and burns in the kitchen. However, it’s a standard many are proud to associate with.

Now that you know why chefs wear white, it’s easy to appreciate their commitment to serving you better. if you want to become one, know that your dedication to the traditions of the profession comes first.