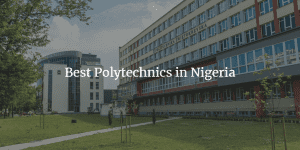 Would you like to know the best polytechnics in Nigeria in 2022? Then you are at the right place.

At the end of a program, students obtain bachelor’s degrees at universities and diplomas at polytechnics. When compared to each other, a university degree has greater value than a Polytechnic diploma to an extent.

Universities are known to offer theoretical and practical education, while Polytechnics go deep into the practicals to ensure the students understand the concepts better without too much theory work.

If you are interested in knowing the Best Polytechnics in Nigeria, this guide will be of great assistance to you. Choosing just anyhow polytechnic to obtain your ND or HND, might be such a bad idea so you should be informed of the best ones in the country.

Yaba College of Technology, which is popularly known as YABATECH was founded in 1947 being the first higher educational institution in Nigeria. The Polytechnic was renamed the Federal Polytechnic, Yaba, but later changed back to its current name.

YABATECH has an urban campus that is located in Yaba and boasts a student enrolment of over 16,000. For a very long time now, it has topped the list of the best Polytechnics in Nigeria. This best explains the reason for the high enrolment of students.

Auchi Poly currently boasts over 10,000 students enrolled in business, environmental, arts and technology courses. It is made of 7 schools, namely;

Another one of the best polytechnics in Nigeria is the Federal Polytechnic, Ilaro which is located in Ilaro, Ogun State. It was established on July 25, 1979, and opened officially on November 15, 1979.

The Polytechnic has since then acquired the reputation of a quintessential institution educating and training students in five schools or faculties, namely;

Popularly known as Poly Ibadan, The Polytechnic, Ibadan is a tertiary institution in Ibadan, Oyo State. It was founded in 1970 and is similar to other Polytechnics in Nigeria.

The institution was established to provide an alternative higher education to universities, particularly in technical skill acquisition. The Polytechnic, Ibadan, has a vocational and skills acquisition center that is designed to ensure that students master a skill before leaving the institution and also provides skills training to the host community.

There are 5 different schools/faculties at The Polytechnic, Ibadan. They include;

It later became autonomous on October 12, 1992. This was how it all began. Osun State Polytechnic has 7 schools/faculties, including;

It has functional memoranda of understanding with different universities within and outside the country. The school has 8 academic faculties, namely;

Imo State Polytechnic is twenty-six kilometers from Owerri via the Port Harcourt Road and the campus has over three hundred and sixty hectares of land. The Otamiri River runs past its border, making it ideal for all year round agricultural production through irrigation

Kaduna Polytechnic is one of the earliest polytechnics in Nigeria, located in the Tudun Wada area of Kaduna South local government of Kaduna State, North-Western Nigeria.

It was established in 1956 as Kaduna Technical Institute after the British Government accepted the upgrading of Yaba Higher College (now Yaba College of Technology) to a technical institute and also proposed the establishment of technical institutes in Kaduna and Enugu through the recommendation of the Higher Education Commission.

The board of Governors of Kaduna Polytechnic was set up in 1991 and comprises representatives of eleven state governments, universities, and rectors. The board is responsible for the supervision and control of the school, they are called the Governing Council. Kaduna State Polytechnic has 6 schools/faculties. They include;

As you might have known, LASPOTECH which is known as Lagos State Polytechnic has been one of the best Polytechnics in Nigeria until 2022. The LASPOTECH we know is no longer a Polytechnic, it has now been approved to operate as a university, so we can not include LASPOTECH in this list.

It is now known as Lagos State University of Science and Technology.

Before you go to any tertiary institution, I believe you must have thought about what next after getting your degree or diploma.

Well, if you are attending a university, you might believe that the benefits are limitless in the country and less for Polytechnic Graduates. Well, that might be wrong.

Be it a degree, ND, OND, HND, or NCE, you will surely find a marketplace in Nigeria. The truth is that Polytechnic graduates are not highly rated in Nigeria because most people think a Diploma is a less-standard way of grading students.

Which Polytechnic is the cheapest in Nigeria?

Federal institutions are known to have cheap tuition fees and this applies to universities, polytechnics, and colleges. A federal academic institution must have affordable fees when compared to state or private institutions.