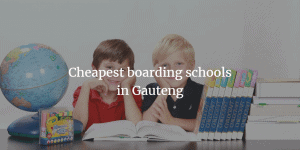 Gauteng is one of the 9 provinces of South Africa and is known to be the smallest of them all, by landmass. Even though Gauteng has the smallest land size amongst all the provinces of the country, it is home to over one-quarter of the South African population (Approx. 15 million people). You might wonder why it’s a bit crowded..No other reason than its urbanization.

From the data above, it is expected that most of the schools in the province will have a common feature of high tuition fees. This is true, as over 70% of the schools in Gauteng, especially Johannesburg have very expensive tuition.

This might not be affordable for everyone in the province as the cost of living in the area alone is quite expensive. This is why most parents and guardians prefer to send their kids and wards to boarding schools to reduce the costs on the family.

In this article, I will give you the list of the top 5 cheapest boarding schools in Gauteng, their tuition fees, and other things you need to know about them.

The school’s official name is Redford House Blue Hills. It is a private school situated in Blue Hills, Kyalami, Midrand. Blue Hills is very popular in Midrand for its affordable tuition, both for its day and boarding students. It offers a balanced, holistic, innovative, and vibrant learning experience of the 21st century.

This is done through its IEB curriculum which is the standard for schools in the country. An amazing feature of the institutions is that students are offered a wide variety of academic, performing, and creative arts and Sports to encourage them to discover what they are good at and capable of doing on their own. With this, the learners are well-rounded and lack nothing to make them improve all round.

Overlooking the rolling hills of the Blue Hills Country and Equestrian Estate in Blue Hills, Kyalami, Midrand, and Redford House Blue Hills is set among beautiful, natural, and established indigenous trees in this premier lifestyle estate.

Redford House Blue Hills provides premium education from 3 months to Grade 12 to families living in the broader Midrand Kyalami, Blue Hills, Laudium, Eldoraigne, and Centurion. To know more about the school and its tuition, visit the official website.

Founded in 1953, General Smuts High School is the oldest and largest English medium High school in the Vaal Triangle. Ever since its establishment, the right educational foundation has been laid and strong goals were set. The management has since then worked so hard to ensure the goals are achieved for every student.

General Smuts High School works towards instilling civic awareness so that the learners can learn to care for others and show compassion to neighbors in need. The grounds are some 17 hectares in extent.

Both the school and the boarding establishments are situated in this area in addition to the sports facilities. The school also leases 2 hectares of land on the Vaal River for the use of the Rowing Club.

The school encourages students to participate in a wide range of sporting and cultural activities aside from academics. This ensures that team spirit and leadership skills are developed in them. General Smuts High Schools has one of the most affordable tuitions in Gauteng, charging just R5,500 per student. To know more, visit the website.

Even with the old establishments of schools in the country, there were still major education crises. This brought about the intervention of Sally and Rob Hurlin to establish a disciplined and secure Christian environment in which the best possible education could be provided at the lowest possible cost to students from disadvantaged educational backgrounds.

The other major goal was to invest in the future of South Africa by developing our young people and by giving them the necessary strong educational foundation.

Offering top-quality education to students at very affordable tuition is one of the features of Nigel High School. The secondary school has established itself as a center of academic excellence, at the sharp end of league statistics and offering students a comprehensive learning experience.

The learning is not focused on only subjects and curriculum learning, but also on sports, culture, and other supporting activities. In addition, Nigel High School tuition is the lowest amongst all the boarding schools mentioned in this article.

Crawford is an international educational institution that established its first school in Killarney, Johannesburg, in 1993. Today, the Crawford collection of schools is regarded as the largest single private school organization in South Africa.

While academic excellence forms the core of what they offer, the students are placed in the highest priority of any of the school’s affairs. By combining a strong sense of curriculum with the necessary global competencies, Crawford creates a scaffolding where teachers can support students in the institution.

Attending a Boarding school or any school at all in Gauteng can be so expensive but there are affordable ones that still offer quality education. They have been mentioned in this article and will help you in reaching a conclusion on which to attend faster.