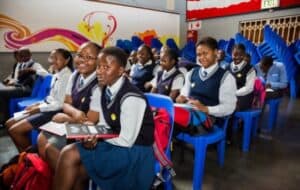 Do you want to know what the best schools in Johannesburg are? Then you are at the right place.

It is one of the most popular and favorable places to live and establish a business in the country; This is why many South African companies and SMEs have their head offices in Johannesburg.

If you live in Johannesburg, you will need a good school for your kids to attend. The region is known to house most of the best schools in South Africa. It is only fitting that you take your child(ren) to any of these schools.

I have compiled a list of the Best Schools to attend in Johannesburg. The article will also include a brief history and the tuition fee required by the school.

Orban School is one of the best private schools in Johannesburg that you can take your child to. The school is co-educational and offers a dual-medium education to pupils. They are taught in English and Afrikaans.

Orban School is located in the heart of the Melville Koppies, making it easily accessible in the city. This school offers affordable high quality pre-primary and primary education to children in a diverse community.

Learners at Orban School are between the ages of 1 and 12. Classes are small and focused on ensuring the proper teacher-student ratio. Orban school offers extracurricular activities in sports to give pupils a well-rounded education. The school is also safe and secure for your wards to learn.

The Ridge School was established in 1919 and is one of the oldest and finest English-medium preparatory schools for boys in Johannesburg. It is situated on a 16-acre campus of the historic Westcliff Ridge, off Jan Smuts Avenue and Valley Road.

The school has a strong sense of history, making it one of the best private schools in Johannesburg. However, it is firmly rooted in its modern contemporary environment.

The Ridge School has since been providing lads with a holistic technique to education for over a century already. It offers a unique and balanced education in all areas. This ensures students have respect for each other and cultural diversity.

The Ridge School aims to grow each boy into a confident self with a decent spirit. It has a refined ethos based on Christian values and morals, aimed at quality education and community development.

Presently, JMS boasts 1000 students in its primary school section at Forsburg, which caters to Grades 1-12. This section is made up of two campuses on Bree Street, Fordsburg. There is a separate preschool located in Mayfair that caters to Nursery, Intermediate, and Grade R pupils.

Johannesburg Muslim School aims “to provide young children with the holistic concept of knowledge with the holy Quran and the Sunnah as the source of guidance.” The school has and adopts a core ideology that “Every child is Jannah.”

Roedean School (SA) is a private all-girls school located in Johannesburg, South Africa. It was founded in 1903 as a sister school to the famous Roedean in Brighton, England, by Theresa Lawrence and Katherine Margaret Earle.

Today, Roedean School boasts over eight hundred girls from Grade 0 to matric who proudly wear the Roedean Uniform. The girls at Roedean are from various cultural groups in South Africa and beyond.

During the school’s centenary in 2003, they displayed 47 country flags representing the different nationalities of pupils that attended the Roedean that year. It is believed that every girl who attends Roedean will one day leave the school with the hallmark of Roedean.

Assumption Convent school is an independent school for girls and is famous for providing accessible and high-quality education to these children. It offers education to girls from Pre-Grade to Grade 12.

The school is made up of a team of teachers that work to foster self-discipline, respect, and responsibility within catholic ethos. Assumption Convent school boasts 600 girls in less than 25 classes; This ensures each child is noticed and well nurtured.

At the same time, the school’s small size breeds a family atmosphere for good morale of staff to ensure long-serving and dedicated teachers. Teachers at Assumption Convent School train pupils to discover and develop their exceptional talents and strengths.

The ethos at Assumption has enabled students to achieve their maximum potential and utilize their talents to make a positive difference in society. Assumption Convent School is an associate member of the Catholic Schools Board and the Independent Schools Association of Southern Africa.

Reddam House was established by a renowned educator, Graeme Crawford, in 1993. It was the founder’s first school and first opened its doors in South Africa. In the subsequent five years, Crawford’s schools grew to 21.

Reddam House is well known for encouraging and nurturing individuality, talent, and self-assurance in a relaxed and secure learning environment. The management understands the importance of education and hence equips students to confidently and proudly face a challenging global future.

SPARK Schools was founded in 2012 by Stacey Brewer and Ryan Harrison. It was established to provide a solution to the lagging state of the South African Education system. They were committed to introducing a new model that would offer high-quality education to children at an affordable cost.

The first school in the SPARK Schools network, SPARK Ferndale, was opened in 2013 in Gauteng, Johannesburg. The School offers a unique learning path for students to master their goals and social-emotional skills.

At SPARK Schools, every child is encouraged to develop a love of learning and make significant academic progress. The school delivers a remarkable individualized educational resort for students.

SPARK uses a mixture of direct classroom education and technology-based understanding where data from each kid is sustained back to the educator; This empowers educators to cater to each child’s personal needs, resulting in scholars who accomplish globally competitive academic results.

St John’s College is one of the famous schools in Johannesburg. It is an independent Anglican day and boarding school for boys situated in Houghton Estate in Johannesburg.

St John’s College was founded in 1898 and comprised five schools; Pre-preparatory, Preparatory, The Bridge Nursery, a coeducational sixth form, and College. The school boasts 1,350 boys aged 3 to 18 on its campus.

St John’s College is a member of the Independent Schools Association of South Africa (ISASA) and the Headmasters’ and Headmistresses Conference.

Saint Stithians college was founded in 1953 on a farm in the Randburg district but is now encircled by the northern suburbs of Johannesburg. At its inception, Saint Stithians was a boys’ school but later created a girls’ school on the campus in 1995.

Saint Stithians is a Methodist school and a circuit of the Central District of the Methodist Church of Southern Africa. It operates in line with a statement of spirituality that outlines its core values and beliefs.

The academic program at Saint Stithians is delivered by excellent teachers who have been trained to nurture inquiry, clear thinking, and unique learning in students. St Stithians also provides academic support and extension to enrich the core experiences of teaching and learning.

Saint Stithians is a proud member of the Independent Schools Association of South Africa (ISASA) and is accredited by Umalusi, the South African certification authority.